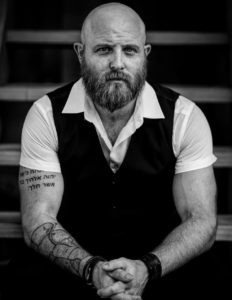 Daniel is an Australian of the Year finalist, Australian Playwright finalist, recipient of Best Director at the Florence Film Awards, and Best Screenplay at the New York Film Awards. He serves as an Ambassador for the Jane Austen Literacy Foundation, received the Collins Booksellers Arts Award, and is the Artistic Director of Salt House Creative.

He hosted and segment produced popular children’s television program Saturday Disney from 2000-2007. This afforded him the opportunity to report on the opening of Disney’s California Adventure, the launch of 20th Century Fox’s Ice Age 2 in London, represent Australia at the Millennium Dreamer’s Global Summit, and report on the opening of Hong Kong Disneyland 2005. Whilst at Network Seven, Daniel also joined the writing team for Home & Away, presented backyard renovation show Ground Force, and performed at both the Melbourne and Perth annual Telethons.

His controversial black comedy about the global refugee crisis, Worm Farming, premiered at the National Museum of Australia in 2017 and has recently been published by Australian Plays. The play was endorsed by human rights and refugee advocate Julian Burnside AO QC. The plays’ success prompted Daniel to join the Australian Writer’s Guild where he now serves as a judging panel member.

Daniel holds a Doctorate in Performative Understanding, focussing on Shakespearean literature and theology, a Masters in Hermeneutics, and a Bachelor of Theology.